Portrait of a researcher - archive 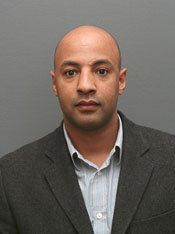 As Doctor of private international law, Mosa Sayed researches in the field of “law and conflicting values” and has focused on the legal challenges facing Sweden after its transformation in recent decades to an increasingly multireligious and multicultural society.

This transformation has brought untested questions and tensions at the judicial level, not least for the courts and authorities that are faced with foreign traditions and ways of life.

“Like many other Western countries, Sweden may appropriately be defined as multicultural and normatively pluralistic as regard the population’s cultural, religious and ethnic composition, which is due not only to the immigration of recent decades, but also to historical reasons owing to its national minorities,” explains Mosa Sayed.

The recognition of this societal fact in the field of law, raises questions connected to the possibilities of accommodating minority values that do not conform to state law reflecting majority values.

Mosa studies some of the issues associated with normatively pluralistic societies, with a basis in the practice of informal dispute resolution in Sweden and the United Kingdom among certain ethnic and religious minority groups such as Jews, Muslims and Roma.

Examples of such institutions are Muslim mosques and denominations in Sweden and Sharia Councils in the United Kingdom. The Jewish institution for dispute resolution, Beit Din, an assembly comprised of rabbis versed in the sacred Scriptures, has a similar function in Sweden and the United Kingdom. The Roma court for internal conflict is called Kris.

Although resolutions within the informal systems are not binding for state authorities, they raise many legal challenges connected to the plurality of norms in contemporary multicultural Western societies and raise questions on fundamental human rights, such as issues of equality between societal groups and equality among individuals within groups.

The informal system for dispute resolution also causes problems in procedural and civil law. The use of informal administration of justice outside the state§ sanctioned legal system also gives cause to ponder the meaning of “law and justice” when certain minority groups in conflict give precedence to their “unofficial law” over state law.

When minorities use religious, cultural or ethnic norm systems that do not uphold fundamental values in the state-sanctioned law, a situation arises of competing norm systems. This in turn raises larger questions on the possibilities to build solidarity, national identity, social coexistence and unity in normatively fragmented communities.

This competitive situation also threatens the state’s monopoly on the administration of justice and can place certain subgroups within minority groups – usually children and women – in vulnerable legal positions.

At the same time, there is reason to reflect on an even greater question of what it means to be a citizen in Sweden and the complexity associated with the concept of citizenship when minorities exercise a range of communal affiliations or do not want to share legal systems, concludes Mosa Sayed.

Inger Österdahl, professor of public international law, pursues research encompassing several fields where the drawing of borders has become more complex in an ever more international arena with new digital modes of communication.

At the same time the distinction between international and national is gradually being dissolved. Laws are created internationally, and countries have to subsequently adapt them to their respective national legislation, as best they can.

– Territorial boundaries are becoming less important as legal delimiters. In this dramatically and rapidly changing international landscape, I am currently interested in two things. One of these research interests is the wellbeing of the principle of public access to official documents, says Inger Österdahl, who has been granted a so-called programme professorship for the 2013-2016 period to focus on this principle of public access.

– The internationalisation of public administration is also causing previously national issues to wind up in the domains of diplomacy and foreign secrecy, says Inger Österdahl, who goes on:

– There were fears regarding the effects on the principle of public access when Sweden joined the EU, and I am now investigating to what extent these fears were justified.

In September 2014, together with her colleagues Professor Jane Reichel and Associate Professor Anna-Sara Lind at the Faculty of Law, Inger Österdahl is arranging an international workshop for specially invited researchers on the theme of “Freedom of Speech, the Internet, Privacy and Democracy”.

The second interest reflected in Inger Österdahl’s research has to do with the laws of war and how international peacekeeping forces fit into a legal system that was created for traditional national armies. Do peacekeeping troops act under or outside of the laws of war?

For example, what happens if peacekeeping forces become involved in outright battles, which is becoming more and more common?

The demand for peacekeeping missions is steadily rising, and the situations in which peacekeeping troops are supposed to serve seem to be ever more complicated.

– Sometimes legal issues may seem technical, but they are often highly charged politically, which makes them controversial and intriguing, concludes Inger Österdahl.

As doctor in environmental law, Yaffa Epstein focuses on developing methods for interdisciplinary collaboration between natural and legal scientists. Terms and concepts rooted in the natural sciences permeate the law.

This is especially true in “new” legal fields like environmental and medical law, but is also true in many “classic” fields such as tort law, in which, for example, scientific expertise is often needed to determine risk or fault. Differing interpretations of these terms and concepts in different disciplines affect decision making and make it difficult to ascertain whether the law is being complied with. When scientific concepts are made part of the law, reference to the natural sciences is often necessary in order to properly understand or apply the law. When judges or other decision makers misunderstand or misuse natural science, the laws’ ability to achieve legislative goals may be hindered.

“Disagreement with scientists does not always mean that jurists are incorrect however. In other cases, decision makers must interpret terms that have different meanings in law and science, or must choose between differing scientific interpretations. How the decision maker understands these scientific ideas determines whether a species may be hunted, whether a food product can be sold, or whether a production technique will be allowed to continue”, explains Yaffa Epstein.

Yaffa often works with natural scientists to analyze scientific concepts used in EU laws. Another area in which she applies her interdisciplinary methods is the relatively recent jurisprudential development of rights of nature. One of the most surprising legal developments of the last decade has been the recognition of rights for nature. In just a few years, the idea of endowing nature with rights or legal personhood has gone from absurd to reality in a growing number of jurisdictions. These new rights have led to some judicial wins for nature protection, but thus far have not yielded impressive results.

“It is yet unclear whether this legal trend as reflected in Ecuador, Bolivia, Colombia, New Zealand, parts of the United States, India, Mexico and even France (in its New Caledonian territory) is the beginning of a new global rights paradigm, or a passing fad that will soon be forgotten”, continues Yaffa.

In a recent perspective article published in Science, “A Rights Revolution for Nature: Introduction of Legal Rights for Nature Could Protect Natural Systems from Destruction”, she and two ecologist colleagues argue that if these laws and new legal ideas are to succeed and indeed continue, they must be well grounded in legal theory and ecology. They identify some areas of inquiry for which legal-ecological analysis could support the implementation of legal rights for nature, including:

How is the rights bearer defined? How to define “nature” is a long-debated philosophical and scientific question. Natural entities for which legal rights have been recognized in some jurisdiction include Mother Earth, nature, species, natural communities, ecosystems, rivers, glaciers and waterfalls. Each of these types of entity comes with its own definitional challenges—for example, how far does a river extend, does it include tributaries, river bed, catchment, rain water etc. While some natural entities, such as species, may be easier to define scientifically, others such as “Mother Earth” may fit more easily within certain individual legal systems.

What rights does nature have? Rights for nature that have been recognized or suggested include legal personhood and procedural rights, representation, property rights, the right to life, diversity of life, clean air, evolutionary capacity, protection and restoration. Natural science expertise is again required to understand many of these rights, for example to interpret what a right to evolutionary process entails.

How are nature’s rights enforced? In some systems, the natural entity is appointed a guardian or representative, in some the public is allowed to bring litigation on nature’s behalf, and in others it may still be unclear how nature’s rights could be vindicated. Nature cannot assert its own rights before a court, but natural scientists can help determine when rights are violated and how they can be remedied.

“However these questions are resolved in various legal systems, the effectiveness of rights of nature will depend to a large extent on those systems’ ability to integrate ecological knowledge. I hope that by highlighting these open questions in implementing legal rights for nature for a broad audience of natural scientists, my research will lead to further interdisciplinary scholarly examination of whether a rights framework is an appropriate means for protecting the environment, and if so how these rights can be effectively realized”, concludes Yaffa Epstein.